As part of my Earth Day observance, let me introduce the newest addition to our eco-conscious family, our new bright blue all-electric Chevy Bolt! 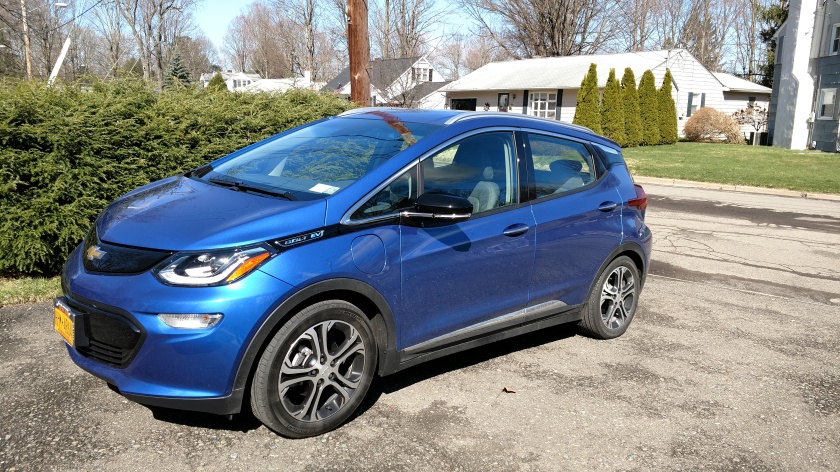 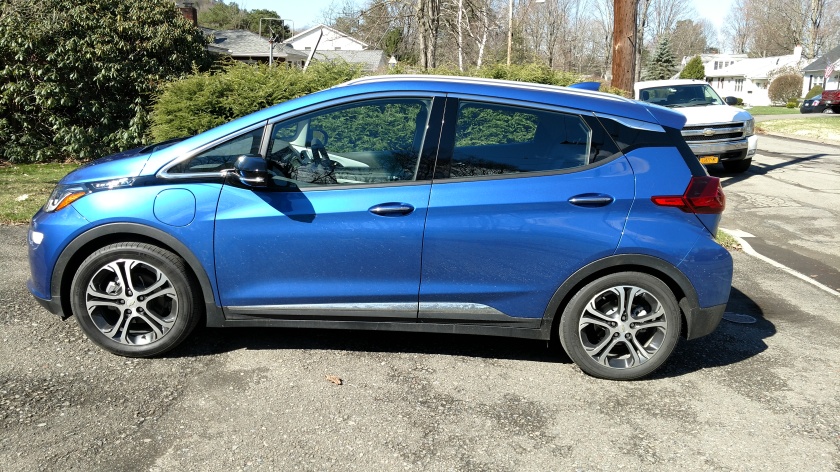 While Bolts became available in some parts of the country late last year, they only arrived in upstate New York in March. Only one dealer in our area is authorized to sell them and I had been inquiring for months, so, when their first Bolt came in, we were among the first to find out. We arranged a test drive and, after waiting a few days for the long-anticipated New York State rebate program to get up and running, we took the Bolt home on March 30th.

There is a lot to learn, though, and a lot of bells and whistles that other people take for granted, like backup cameras and collision avoidance systems, that have been available but weren’t a feature of any other car we have had.

It is nice to have a simple push button start and not to have to worry about keys at all. With no engine, it is very quiet. The seats, front and back, are comfortable for both B and me, despite ten inches of height difference, and the seats are heated, which is nice in the damp chill of early spring. I even tried out the heated steering wheel one particularly chilly morning! There is lots of glass so the visibility is good and we have external sensors that warn about vehicles and pedestrians that are alongside.

It is so much fun to drive! It’s like a game to learn about the regenerative braking and how to get the most miles per kilowatt-hour. It accelerates super fast, which is a help when I have to merge onto the highway near our home, where the speed limit is 65 mph (105 kmh) and the merge lane is short. The link near the beginning of the post tells about the torque, for those of you who know about such things. Our salesperson told us it has a much torque as a 6-cylinder Camaro, but, never having driven a sporty performance-type car, I have no basis for comparison. I just know that it is fun!

We intend to use the Bolt mostly around the county and for short trips until more rapid-charge stations come to our region. The listed range is 238 miles (383 km) on a full charge, although factors such as temperature and terrain affect this. We don’t put on a lot of miles every day and usually charge it once it get down sixty miles or so.

We have taken it further afield once so far. When E went to London, she had to fly out of Syracuse rather than Binghamton, so we took her in the Bolt. The roundtrip was about 180 miles and we had plenty of charge to get there and back, despite the temperature being colder than optimal for best battery range.

At the moment, we are recharging with just 110v household current, but we plan to install a charge station later this spring. That will allow us to do a full charge overnight, instead of two days using household current.

On Earth Day, we are proud to have shrunk our carbon footprint considerably. No burning of gasoline! No need for motor oil! And most of the electricity we use will be produced by our solar panels!

Our Bolt makes every day seems like Earth Day!