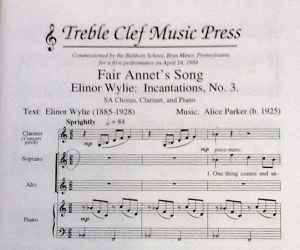 This is the first of what I hope will be several followups to the Smith College Alumnae Chorus celebration of Alice Parker ’47 which took place on September 21.  I thought it best to begin with a post concentrating on Alice Parker and her music.

The Alumnae Chorus sang two sets of Miss Parker’s compositions, Three Seas, with three poems by Emily Dickinson as texts, and Incantations, with four poems by Elinor Wylie. We also sang a Parker arrangement of the spiritual “Come On Up.” Miss Parker conducted her pieces in the concert, although we were able to rehearse with her only on Friday afternoon and Sunday morning.

The music was challenging, especially under the circumstances, with each member of the chorus learning the pieces on her own before coming together to have everything performance ready in under 48 hours.  (We also prepared three Ralph Vaughan Williams settings of English folk songs, which were conducted by Jonathan Hirsh, the current Smith Glee Club director.)  I knew there would be mistakes in the concert, but the performance was successful because we were able to communicate the poetry, music, and mood to the audience.  We were relieved to hear Miss Parker reminds us several times during rehearsal that there is no such thing as a perfect performance.

The best part of the experience of working with Miss Parker was hearing her talk about poetry, her process as a composer, and her life.  She read the poems to us in rehearsal – and to the audience in the concert, relishing not only the meaning conveyed but also the sounds of the vowels and consonants tumbling along one after the other.  She talked about how poems in English fall into rhythms in groups of twos and threes, which results in so much of her music being written in 5 or 7 (3+2 or 3+2+2) to follow the word rhythm.  Miss Parker works only on commission, so she always has a specific group for which she is writing and a deadline to deliver the score.  She explained that once she has chosen the texts, she reads them aloud over and over and, as she begins to compose the melody for the text, sings and dances the poems, filling in the harmony and counterpoint in her head. She wants the music to be fluid and alive as long as possible, only committing it to paper when the deadline is looming. She said, “The page is nothing but a prison for music.”  I was so struck by that statement that I hurriedly wrote it down.  It will always remind me that music is alive and not the static black-on-white notation that we struggle to replicate.

Miss Parker also told us stories from her life, especially her famous association with Robert Shaw, with whom she collaborated on many arrangements before taking on solo assignments from him.  The director of the Binghamton University Chorus, with which I have sung for years, also worked with Mr. Shaw and loves to tell stories about him, so it was fun to hear stories about him from a different perspective.

What was most heartening was seeing a woman born in 1925, still engaged in creative work and still engaged with family, friends, community, and her alma mater.  Should we all be so blessed.

Welcome to Top of JC's Mind! My name is Joanne Corey and this blog is an eclectic collection of my poems, musings, and whatever else is at the top of my mind - politics, films, climate change, church, music, feminism, etc.
Follow Top of JC's Mind on WordPress.com
Join 1,772 other followers