After a few hours in Piran, we boarded our bus for a late lunch in Koper and then went to the cathedral to rehearse for our concert that evening.

The cathedral is dedicated to the Assumption of Mary. Our Slovenian guide told us that about half of the churches in Slovenia are dedicated to Mary under one or another of her many titles. Originally built in the 12th century, the cathedral evolved over the centuries to incorporate elements of later styles. Interestingly, the bell tower was originally a Roman watchtower, which explains why the stonework is so different from the rest of the cathedral. You can see some beautiful photos of the cathedral, including its impressive artwork, here.

As we saw often in Slovenia, locations tend to be a mix of styles over its long history, most of it spent dominated by other entities. The square where the cathedral is located is named Tito Square, after the president-for-life of Yugoslavia. The City Hall, which is on another side of the square, is a 15th century Venetian palace. 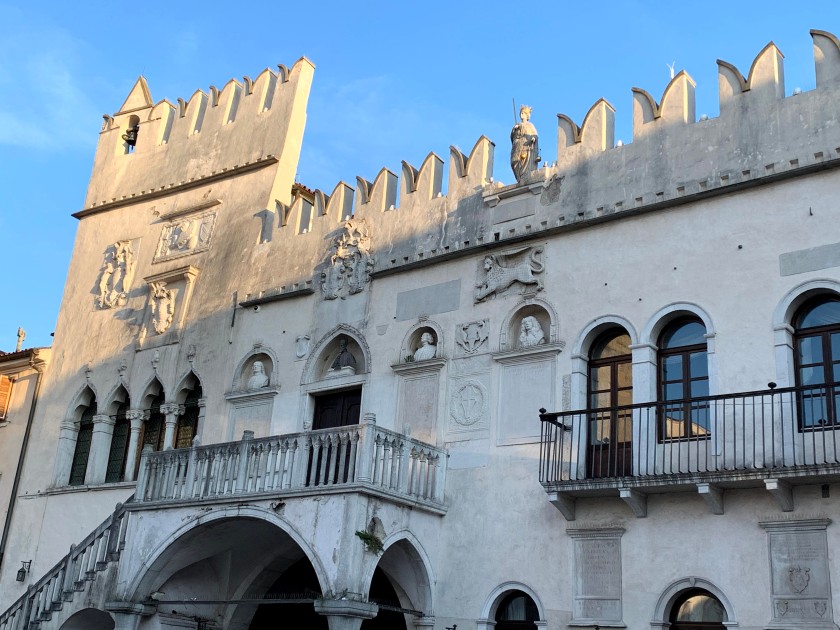 After rehearsal, we had a bit of time to get something to eat before we had to dress for the concert. Given that our lunch had been both late and large, B and I decided to visit a gelato shop down near the port. We ate quite a lot of gelato in Slovenia, as there were shops or stands selling it wherever we had free time, perhaps a nod to the Italian influence in at least the southern part of Slovenia. Fortunately for B, who is lactose intolerant, most of the shops had a nice selection of sorbets and vegan gelato. On this evening, I chose a yummy vegan peach gelato.

After we dressed in our black concert attire, we waited outdoors until it was time to file into the cathedral. Here, my roommate at Smith and my first Smith friend are sitting and waiting, utilizing the fans that she brought for us. The sitting was important because we would be spending a lot of time standing on stone floors. The fans were important because it was July and quite warm. We were lucky, however, to have been in Slovenia in the time between two major European heat waves that set many all-time high temperature records. (I’m the one on the right with the silver hair and blue fan.) 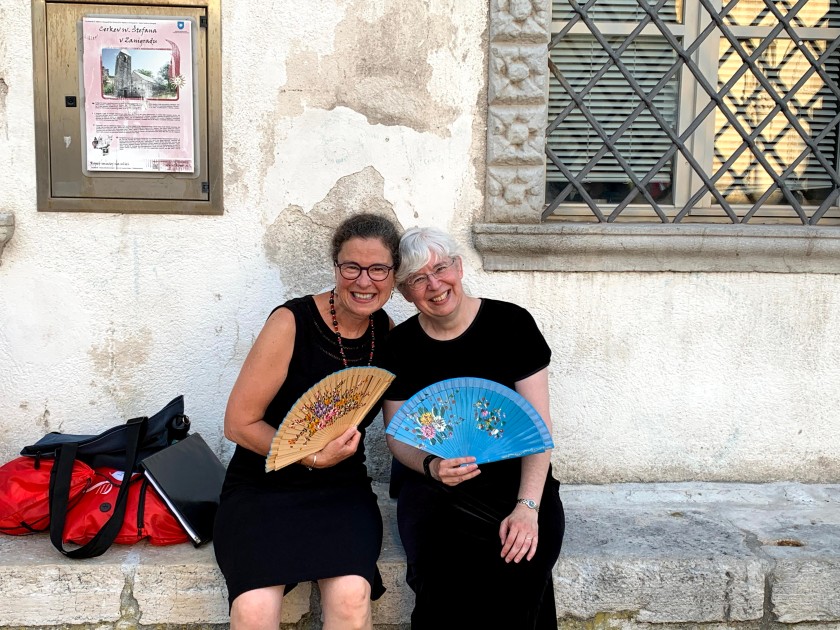 The concert was well-attended and well-received. It was so much fun to sing in that acoustical environment. You can read more about the music and concerts here.

Sharing this poem by Shawn Bird, because a) a lot of the Northern Hemisphere is broiling hot right now and b) I know what hot flashes feel like.

her fingers sizzle from inside out

raising an ocean on her forehead

rivers racing down her back,

Being here in Honolulu for a few weeks has highlighted some differences from being at home in upstate New York, other than driving:
*  Today, there was the monthly test of the tsunami warning system. E’s neighborhood is higher in elevation, so she lives above the evacuation zone. When we were staying in the hotel in Waikiki, the first several floors of the hotels were mostly dedicated to parking. This allows them to keep people safely on the upper floors in case of tsunami.
*  A heat wave here is not as hot as in most of the rest of the US.  We have been having a heat wave with some records tied or broken, but it is only 88-91 degrees F. (31-33 degrees C.)
*  There are microclimates everywhere, but they are much more noticeable here. For instance, in E’s neighborhood, you can be walking in what seems to be a rain shower – while there are no clouds overhead and the sun is shining.  The rain is falling in the  Palolo valley and being blown into Kaimuki.
*   At home, I’ve never had a tiny chameleon show up in the bathroom, matching its color to the bathmat.
*  There is much more coverage in the news on climate change and renewable energy.  Despite Hawai’i being the most remote islands in the world, the effects and the threat of more effects are real.
*  Because the angle of the sun is higher here, solar panels can often be placed on more than just the south-facing slope of a roof.
*  Unlike home, there is almost never a basement here. It ‘s strange to me to see water heaters just sitting outside under the eaves.
*  There is a lot more discussion and coverage of homelessness and affordable housing.  Rents and real estate prices here are very high and there are many people who can’t afford them, even when they are employed. While there are single people who are homeless, there are also many homeless families.
*  The tension between the indigenous Hawaiians and the state is obvious. There are demonstrations almost daily against development of certain areas. While these problems are also present in New York, they are much more hidden.