I’ve spent the bulk of my time over the last (more than I care to tally) years taking care of various generations of my family, which has involved a lot of interfacing with medical, educational, financial, insurance, religious, and other institutions. Since mid-December, I’ve been mired in dealing with issues around Paco’s health and his move from his independent living apartment into the assisted living unit of his senior community via a hospital stay and a stint in the rehab/skilled nursing unit. There has been an avalanche of problems with medical and caregiving issues, as well as the seemingly more mundane issues of changing addresses, getting mail forwarded, etc.

The intensity of it all has reminded me of lessons I once knew about dealing with institutions, but had managed to forget until they were in front of me, again and often. A caveat on the following list: some institutions or, perhaps more precisely, some individuals within the institution do manage to react both competently and compassionately to individuals in difficult circumstances, but this is more the exception than the rule in my experience.

I wish I could say that my relearned lessons made things easier or less upsetting, but they haven’t. I’m tired and frustrated and dreading the next set of problems/tasks awaiting me this week added to the unresolved things from last week.

Some of the states here in the US are re-opening stores, hair, salons, dine-in restaurants, recreation activities, and other businesses, even though they haven’t met the not-very-ambitious federal benchmarks to do so during the pandemic.  They feel safe enough because they are not large cities like New York City or Chicago and they don’t have thousands of new cases every day in their state – or are ignoring it if they do.

I’m afraid they are ignoring not only science but also the experience of my state, New York.

The health guidelines are that limited re-opening should not occur until a state has had two weeks of decline in the number of cases. The reason for the two week timeframe is that fourteen days is considered the maximum incubation period, although people can develop symptoms as few as two days after exposure. If numbers are declining for two weeks, it signals that the outbreak is under some measure of control, so careful resumption of some business and recreational activities can resume in conjunction with testing widespread enough to quickly detect a rise in cases, in which case stricter measures would be resumed until there was again a two week decline. Not only do the states that are opening not meet the two-week decline criteria but also they don’t have the testing capacity to quickly detect an uptick in cases.

The Centers for Disease Control and Prevention, in studying the virus’s path in the United States, now realize that the strain that has caused so much illness and death in New York came through Europe, not directly from China. This strain appears to be even more virulent than the strain that came to the western US directly from China. During the weeks when the administration was banning travel from China, thousands upon thousands of travellers arrived from Europe to NYC area airports, some of them bringing the virus with them. It’s now estimated that there were 10,000 cases in the NYC area before any were officially recognized as COVID-19; this explains why New York State has so many more cases and, unfortunately, deaths than other states. The virus was already wide-spread in an area with a high population density weeks before anyone realized it.

New York, through closing all but essential or work-from-home businesses and encouraging most people to stay at home except to buy needed supplies, has managed to bring down the number of new cases, hospitalizations, and deaths, although not yet for long enough to enter phase one re-opening of some businesses. Plans are being made for eventual re-opening with testing in place to make sure that things will not get so out of hand that our hospitals will be overwhelmed with critical cases. There is the very real possibility that, despite all the planning and precautions, we might have to reverse course and close down again if the numbers start climbing. Until there is a vaccine, it is unlikely we will be able to get the case number down to zero or resume large-scale gatherings.

It’s not that Governor Cuomo and other state leaders don’t want to open more of the economy. They do, but not at the cost of more debilitating illness and death. As a community, we are all responsible for trying to protect the health of others, especially those most vulnerable to complications and those who are working in health care, food service, delivery, transit, custodial, and the other essential businesses that have been continuing to serve throughout the pandemic and who have been getting sick at much higher rates than other New Yorkers.

Our state leaders are also acutely aware of those who are unable to work because of the restrictions in place. There is enhanced unemployment insurance in place, as well as emergency food, utility, health, and homeless outreach programs. They are refusing the false dichotomy of illness/death or the economy, trying to prioritize health and life for everyone so that we are healthy to re-build our economy.

There are some New Yorkers and some folks in other states who are claiming that they have a right to be anywhere they want and do anything they want and that government has never interfered in people’s lives like this. They are overlooking that with our rights, both political and human, come responsibilities. The individual has the right to risk their own health, for example by drinking alcohol, but with that comes the responsibility not to harm others through violence or driving drunk. National and state governments have taken action to protect the public health in prior epidemics, such as the 1918 flu pandemic and the waves of polio that afflicted the world before the development of the vaccine. As I am fond of pointing out, in the Preamble of the Constitution, we the people of the United States established our national government to “promote the general welfare.” Each person has that responsibility to all the others. While some may have fallen into the illusion that individual freedom entitles them to do whatever they want, our system has always been a social one. One person’s freedom can’t interfere with others’ well-being, at least, not without challenge.

As I watch the news of opening of businesses in other states and see people in large gatherings without personal protection, I worry that, within a couple of weeks, there will be coverage of spikes in cases, more hospitalizations, and more deaths, especially because some of the states have re-opened with major outbreaks in factories, nursing homes, and prisons, as though those cases won’t spread beyond facility walls. Maybe the strain they have circulating is not the more virulent one we have suffered with in New York.

Or, maybe, our collective burden of sorrow will be increased, knowing that learning lessons from New York’s experience could have saved heartbreak and lives, if only people had heeded them.

“When the freedom they wished for most was freedom from responsibility, then (they) ceased to be free.”
~~~ Edith Hamilton/Edward Gibbon from The History of the Decline and Fall of the Roman Empire
*****
Join us for Linda’s One-Liner Wednesdays! Find out more here:  https://lindaghill.com/2020/04/22/one-liner-wednesday-april-22nd-2020-some-truths-dont-age-at-all/

“You owe the world
Not the other way around”
~~~ Jenny Holzer

Join us for Linda’s One-Liner Wednesday! Find out how here:  https://lindaghill.com/2020/02/26/one-liner-wednesday-written-off/

I do retain some hope that 2019 will be a better year for the United States with more shared responsibility in Washington. Perhaps there will be some consensus building and more attention to the common good. 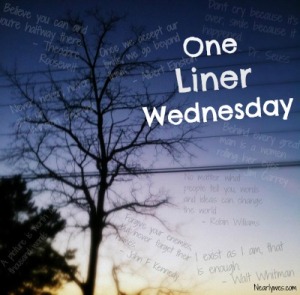