There are always flowers of some sort here in Honolulu. One of the things about coming at different times of year is that you catch different plants flowering.

I am not sure what these trees are, other than I know they are no longer planting them as they are not native. (If my younger daughter were here, I’m sure she would be able to tell us what they are and how they are being managed.) It’s interesting that the blossoms develop along the branch but not at the tip. There are clusters of blossoms and then more leaves beyond.

Some yellow hibiscus in Kapiolani Park, adjacent to Waikiki beach. 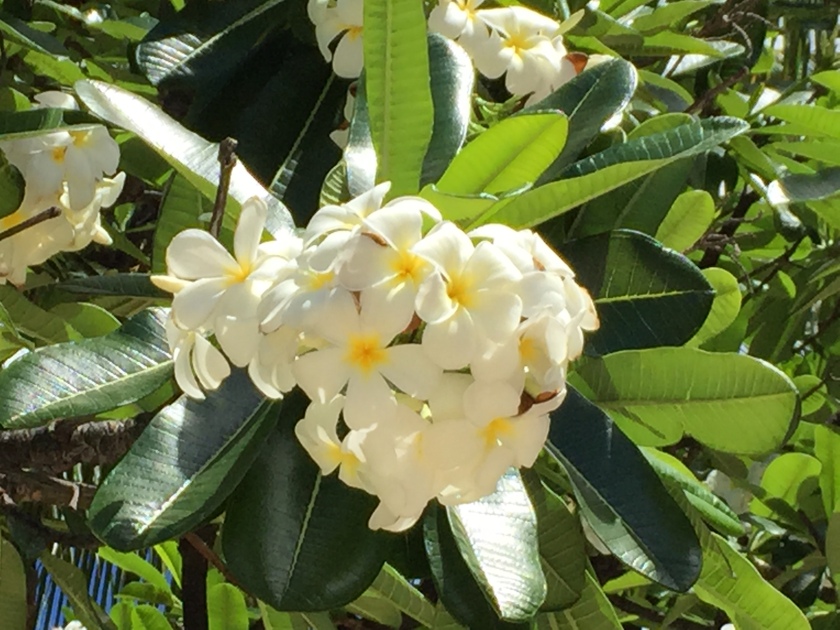 We have often seen plumeria blooming on other visits, but not nearly so prolifically as this June.

While I’m at it, let’s throw in another couple of photos!

Looking out from lunch at Lulu’s near Waikiki. We were sitting at the edge of the second floor, which, like many restaurants and hotel lobbies, is open rather than walled off. 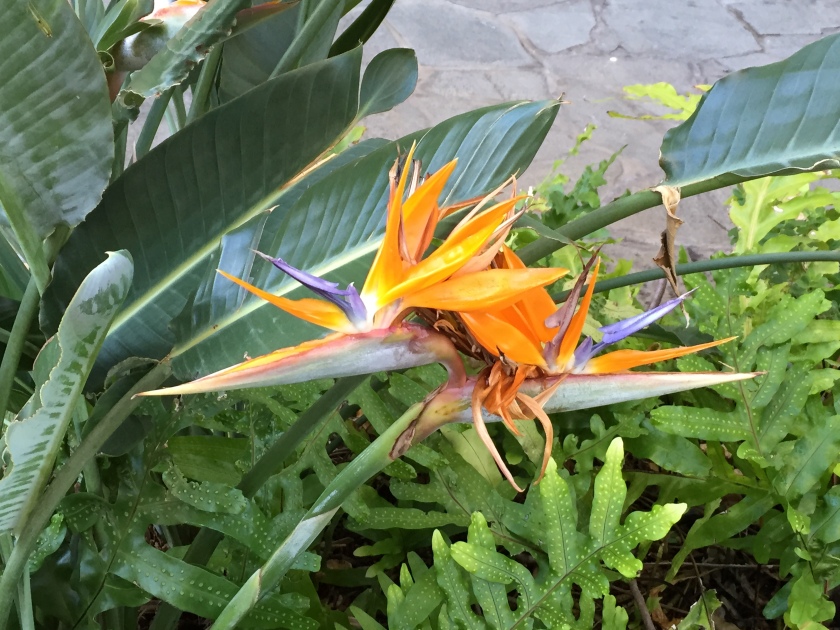 A pair of bird of paradise blossoms outside our hotel.

We all got up early this morning to arrive at the beginning of the Diamond Head trail around 6:30. We chose today to climb because the trade winds have finally returned, ending several days of hot. muggy weather. We were all equipped with our sturdy shoes and water bottles and a couple of cameras. The trail is eight tenths of a mile and includes a number of switchbacks, a short tunnel, and several flights of stairs, for when the slope is too steep to manage any other way. There are several lookout points along the way for taking photographs and – more importantly for me – resting a bit before the next uphill segment.

There are two routes to the summit; we choose the less stair-intensive one, which approaches the old civil defense post/observation lookout from outside. The view from the top really is worth the climb! Looking inland, we could see Manoa Valley, where the University is, and Kaimuki, the neighborhood in which my daughter and son-in-law live. Along the coast we could see Waikiki Beach, with all of its attendant hotels and stores and Kapiolani Park beside it. We could see Diamond Head Lighthouse further along the coast. And, of course, we saw a great expanse of the Pacific – white lines of breaking waves near shore and deep blue waters beyond with an occasional ship heading to or away from port.

We descended by going through the old civil defense structure, which involves descending a spiral staircase and passing through a concrete structure to reach a very long, steep flight of outdoor stairs. We were glad we had decided to take the alternate route up, as descending the stairs was less daunting than the prospect of climbing them. The descent was a bit quicker than the ascent, although we had to be even more careful with our footing. The rock path was often slippery, as there was a thin layer of dirt that had been transformed into mud by the rain the night before. Still, the front that brought the rain had brought the cooler, drier air that made the climb doable for me, so it was a fair trade.

We rewarded ourselves for all our hiking with a nice breakfast at one of Beth and Larry’s favorite neighborhood restaurants. We had eaten an early breakfast before our hike, but banana pancakes with coconut syrup were certainly tasty for second breakfast.

We headed to the leeward side of the island to go to the (very commercial) Dole plantation. It was the original site where Mr. Dole started growing pineapples, which grew to more and more acreage, a huge cannery in Honolulu, and lots more acreage on Lana’i, before contracting to a much smaller footprint in the Islands. The treatment of workers was glossed over in the signs and presentations, as one would expect from a company-run enterprise. We did get to see how pineapples are grown, plus bananas, cacao, coffee, and other plantings. We all had a delicious Dole Whip treat. Dole Whip is pineapple soft-serve, with the bonus of being lactose-free. I had mine as a float with pineapple juice. Yum!